The traditional type of hunting most commonly associated with Židlochovice are driven pheasant hunts in our historical pheasantries. First records of pheasant keeping in the vicinity of Židlochovice date back to the late 17th century. Game-keeping and pheasant-keeping enjoyed a boom under the Hapsburg archdukes. Following the nationalization of Hapsburg estates in 1918 and in the second half of the 20th century, pheasant-keeping went through a major upturn. Through carefully planned stand regulation, individual pheasantries were systematically and gradually transformed into their present shape. The main objective of all the stand changes has been to create an ideal environment for the breeding and hunting of pheasants in historical pheasantries which we were entrusted with managing. 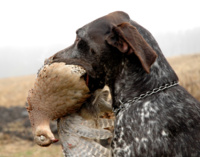